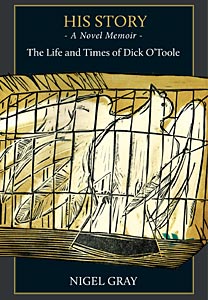 Customers outside Australia can order a paperback edition or eBook through online suppliers.

An original and unique literary tour-de-force, HIS STORY – A NOVEL MEMOIR – THE LIFE AND TIMES OF DICK O’TOOLE, is a blend of memoir, faction, fiction, and radical social and political history that is funny, tragic, playful, iconoclastic, and satirical. A journey from bleak house to great expectations, it covers the period 1941-1977 cutting cleverly back and forth between the personal life of Dick O’Toole (a twentieth century hybrid of Don Quixote, Stan Laurel, and Henry Fielding’s Tom Jones,) and the major events taking place on the world stage. It is a big book in every way: nearly 900 pages long, but more importantly big on ideas, big on compassion, big on revelation. Unlike his protagonist’s performance in a fairground boxing booth, Nigel Gray comes out swinging. The tone of voice and the language have an uncommon vitality, veering exuberantly between the literary and the colloquial, and even the most complex material is rendered with great clarity and subtlety while at the same time being profound and poetic. HIS STORY carries the reader through three extraordinary decades that encompass the Second World War and post-war austerity; the struggles for colonial freedom and civil rights; the birth of Apartheid, Feminism, Black Power, and Flower Power; 1968 – the ‘Year of Revolutions’; the American War in Southeast Asia; the handiwork of the graduates of the ‘School of Assassins’; the Troubles in the north of Ireland, and much, much more. Readers are advised to fasten their seat belts: they’re in for a wild ride.

A moving and compelling work. It can be reminiscent of some of the later works of Naipaul, but the work it most insistently reminds me of is in fact not a text at all but a film, Pontecorvo’s ‘The Battle for Algiers’. The prose writer whom I would guess Gray has learned most from is John Berger, but Gray’s writing has a streak of lyrical humour that is quite absent from Berger’s writing, and which gives his work a wholly distinctive tone. Dr Dick Davis, award-winning poet, and Department Chair, Ohio State University.

A remarkable work of literature. Mr Gray reminds me of Kurt Vonnegut. The writing is swirling and chaotic, rarely in one place, a terrific collision of ideas and images, memories and diatribes. Like Vonnegut, he isn’t afraid of playfulness. I like that in a writer. It shows good command. Make no mistake, we are in the hands of an accomplished writer. He shames pretenders like Augusten Burroughs and James Frey because clearly Mr Gray is the real deal. Dr Glyn Parry, award-winning Australian author, and educationalist.

Nigel Gray is a writer of substance. Connections are made that are still resonating with me. At times I was reminded of Agitprop Theatre. At other times there was a tenderness and poetry that was very moving and empathic. Dick O’Toole’s adventures are anchored in a corrupt world where love and acceptance have to be seized wherever and whenever they can. I was often profoundly moved by his expert storytelling and then Gray would subtly (and often not so subtly) undercut so that the authorial voice was never very far away. Many of the quotations and world events read like a counter-culture alternative history of the latter half of the twentieth century. Michael Barham, Dean Human and Life Sciences, Roehampton University.

HIS STORY – A NOVEL MEMOIR – THE LIFE AND TIMES OF DICK O’TOOLE is a book utterly unlike anything else, and full of paradoxes. It describes riotous sexual adventures and misadventures, but is also fabulously romantic; and it chronicles some of the worst atrocities of the 20th century, while brimming with life and warmth, and often being laugh-out-loud funny. Reading it is like spending time with a friend who is sometimes outrageous, sometimes ferocious, sometimes tender. And it’s addictively well-written. I absolutely loved it. Margaret Leroy, author.

The best way to explain the uniqueness and significance of this work is to expand the author’s description of it as a “novel memoir”.  On the one hand this phrase indicates that this narrative is a careful hybridisation of an autobiographical memoir and a novel: it relies faithfully and factually upon details of the author’s life, but it sometimes adds excursions into fictionalized material.  This “fictionalized material” relates to the socio-political events of the wider-world, and is “fictionalized” only in the sense that it offers dramatizations of key moments in history that occurred during the author’s life (for example, the various announcements of key escalations of American military involvement in Vietnam in the 1960s).  Viewed this way, a work which might be described as a “standard autobiographical memoir” becomes something much, much more than that: it becomes a record of the author’s times (as well as of his life) and of his understanding of how those times impacted upon him.  This makes it a “novel” memoir – one that is innovative and groundbreaking in its approach. Professor Van Ikin, UWA, Editor and publisher: Science Fiction: A Review of Speculative Literature (1977- ).

I have read many of Nigel Gray’s works and have always regarded him as a major Australian writer who deserves a lot more critical attention. He has contributed in a very distinguished way to all writing media – poetry, novels, plays – and has shown professional accomplishment in genres as diverse as brief, charming books for children through to the epic (and massive) HIS STORY – A NOVEL MEMOIR. He can make words do anything and is a powerful writer. Bob White, Professor of English, University of Western Australia.

HIS STORY – A NOVEL MEMOIR – THE LIFE AND TIMES OF DICK O’TOOLE is a huge, cartwheeling observation of life – the personal story anchored and brought into relief by astute links to political and social events of the times. I hesitate to use the over-used word “masterpiece”; but it is certainly a unique approach to memoir and enormously entertaining. Richard W. Harding, author and criminologist.

It’s absolutely marvelous. A laugh on every page. Australian literature and Australian politics have become so serious and boring – this is a delight. It needs to be read slowly and carefully. I read many passages twice, just for the joy of reading them again. I didn’t want it to end. It’s given me endless pleasure. Dick O Toole is my latest hero. Sadly, it won’t be a bestseller. It’s just for the chosen few. Nigel Gray is a great writer, but I worry that he won’t get the readers he deserves – they do nasty things to writers who challenge or tease them too much! Sister Veronica Brady.