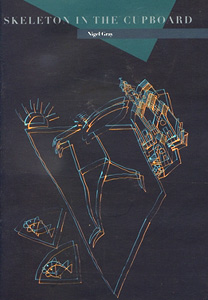 Shortlisted for the WA Premier’s Award

Skeleton in the Cupboard is a collection of short stories with some very strong pieces that explore a range of human emotions. Nigel Gray examines life in terms of small incidents but manages to interweave into the lives of his characters a larger sense of social history. Written with a strong sense of an ending, these stories carry the reader with their narrative rhythm and psychological insights into human behaviour. The narrative point of view is engaging, tolerant and compassionate but never sentimental. Prof. Vijay Mishra, Judges’ report, WA Premier’s Book Awards

Skeleton in the Cupboard is a set of short stories, sometimes sombre, sometimes poignant, and always serious in underlying themes. Gray has the capacity to construct a short narrative in the classic de Maupassant way, so that the reader is drawn irresistibly into the narrative and intrigued by the characters, until usually the jaws of the story snap shut in the last lines, suddenly shifting the perspective in a way that enforces reinterpretation of the piece. He is naturally curious about people, which is surely the fiction-writer’s sine qua non, and he is not afraid to take on the ‘big themes’ of death, mental illness and loneliness. Always, the perspective is kindly and communitarian, which gives a positive and restorative tone to the stories. Professor R S White

Highly praised by the likes of Vonnegut, Bradbury and Berger, Gray’s fiction is tough and uncompromising. Strangers is an epistolary novel of intimacy and disconnection. No one writes letters as lyrically honest or self-lacerating as these, of course, but the effect is moving and provocative. Gray’s short stories are equally riveting. Murray Waldren – The Weekend Australian

Of Happy Families, another of Gray’s works, John Berger has written: Nigel Gray is an authentic and rare writer. That is to say, what he has lived and what he has seen pursues him until he has told it; and what he has to tell, although familiar to millions, is ignored in most books. Hence his heroism. High praise indeed, praise I can only echo for both Strangers, and Skeleton in the Cupboard. There is a compassionate knowledge about life and living in these works, a wisdom of searing honesty which is eloquently literary but, at the same time, down-to-earth and approachable. Donna Lee Brien – Imago

Mercifully Nigel Gray is not a fashionable writer. He is more important, a writer of integrity who knows how to tell a story. He is not interested in facades but in what goes on behind them, not in the rich and famous but in ordinary people, the ways in which they live, enjoy themselves, survive and refuse to let the power of others or their own powerlessness stupefy them or take away their dignity. Nor does he pay tribute to theories about writing. He remains his own man, averting his gaze from the beaten track, hating injustice and brutality and celebrating a humanity often achieved against the odds. Gray feels and means everything he writes and is not afraid to face facts, as the sharp accuracy, understatement and wit of his writing makes clear. But because he is able to suggest the ways in which individual lives fit into the tragi-comedy of our times his stories fill a wide, sometimes epic canvas even as they celebrate the individual’s power to be him/herself. In an age in which so many of us live by slogans, shouting identical syllables in unison, he celebrates the eccentric and unusual. Sister Veronica Brady