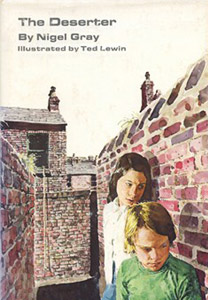 ‘Now, we’ve smoked the pipe of peace together. That means we’ll never betray one another…’ He’s hiding in an old abandoned house when Andy and Chris and two friends discover the deserter. He has run away from the British Army, and now the police are hunting him. Andy thinks they’ll have fun helping him escape – like playing secret agents – until he realises that this is no game. Dave, the deserter, is special. You can talk to him about hard things – like being scared and lonely. And Dave isn’t afraid to show that not even grown-ups have all the answers. Then their hideout is discovered, and they have to move fast… During these eleven days, all four young people discover new things about themselves. But it’s Andy who’s left to puzzle out what it really means to be ‘blood brothers and sisters’.

While it is a good, exciting read, it raises several moral issues. The Guardian

An exciting book with an unusual plot. Tops TV Magazine

An appealing and useful novel. The first person narrative has an attractive freshness, and some punchy episodes allow a fine balance between reality and reassurance.  Books for Keeps

Closer to the experience of vast numbers of young people today than books that project a cosy and remote middle-class world. A good adventure story, it contains some gripping descriptive passages. Northampton Echo

Behind the fast-paced action are all the problems of taking responsibility for one’s own actions which were raised in the War Crimes trials. The Birmingham Post